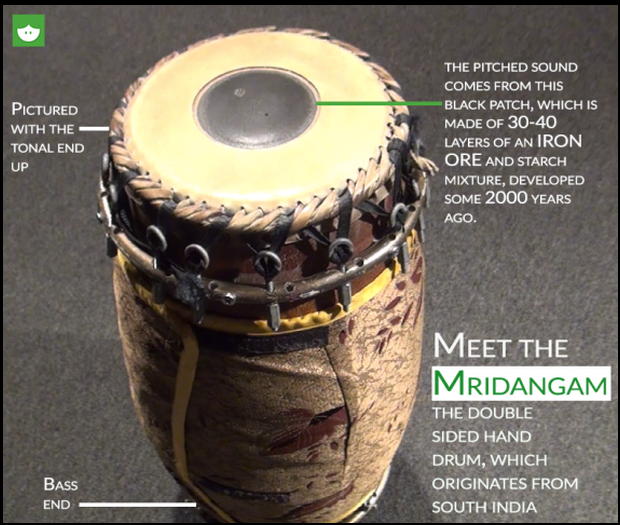 The classical music of India is one of the oldest, most intricate, and versatile forms of music in the world. Boasting a history of over 2,000 years, Indian classical music is categorized into two styles: Hindustani, which is associated with Northern India, and Carnatic, the older of the two styles, with Southern India. These time-honored traditions have been meticulously transmitted from generation to generation in a system called guru-shishya parampara. In this oral tradition, the guru, or teacher, and shishya, or student, form a lifelong bond of continuous musical and spiritual improvement..

India lays claim to a huge variety of drums and percussion instruments. These instruments are used in myriad social and cultural contexts, including sacred rituals and processions, weddings, and theater, dance, and music performances. Among these instruments, the mridangam is one of the most hallowed and popular in all of India. The mridangam, now associated with Carnatic music, is a double-sided hand drum that is played with the fingers and palms of both hands. Considered the drum of the Gods, it is unique in the world of percussion as a pitched drum. Owing to an ingenious construction of 30-40 layers of an iron oxide and starch mixture, the mridangam is capable of producing an array of pitched, semi- pitched, and unpitched tones. The resonant tonality of the mridangam endows it with a singing, melodic quality, as well as a driving, rhythmic quality.

The wide spectrum of sounds of the mridangam is produced using a complex hand drumming technique called split finger. The split finger technique allows the artist to divide his/her fingers into specific formations to create precise tones on the pitched and bass heads of the mridangam. In essence, every finger is treated as an independent drumstick, giving the artist ten drumsticks to create swift and intricate rhythmic patterns.

Indian classical music has been a source of inspiration for generations of performers and composers around the world. Today, it is a global art form that draws from and contributes to diverse musical and cultural streams. The mridangam has become especially popular as a powerful way to expand and enrich the repertoire of countless instruments and genres, and to discover one of the world’s greatest artistic traditions.